As an essential indicator of global climate change and ocean variability, sea level has been simulated by models during both historical and future periods. The Intergovernmental Panel on Climate Change (IPCC) Fifth Assessment Report (AR5) and Special Report on the Ocean and Cryosphere in a Changing Climate (SROCC) provide global and regional sea-level projections, including estimates of contributions from oceans, glaciers, ice sheets, and land water from 2007 to 2100. Previous studies have demonstrated the improved ability of models in simulating 20th century sea-level changes at both global and regional scales. However, the IPCC AR5 and SROCC sea-level projections have not been rigorously evaluated with observed global mean and coastal sea level from a global network of tide gauges as the short overlapping period (2007-2018) and natural variability make the detection of trends and accelerations challenging.

The new paper published in Nature Communications on February 12 firstly evaluates these projections with satellite and tide-gauge observations. The observed trends from the global mean and regional sea level at tide-gauge stations confirm the projections under three Representative Concentration Pathway (RCP) scenarios within 90% confidence level during 2007-2018. The central values of the observed global mean sea level (1993-2018) and regional weighted mean (1970-2018) accelerations are larger than projections for RCP2.6 and lie between (or even above) those for RCP4.5 and RCP8.5 over 2007-2032, but are not yet statistically different from any scenario. The confirmation of the projections gives us confidence in current understanding of near further sea-level change. The IPCC AR5 and SROCC (and later) process-based sea-level projections, evaluated rigorously with various observations like this study and with a continued focus to improve regional patterns, will be important for global and regional mitigation decisions and adaptation planning. 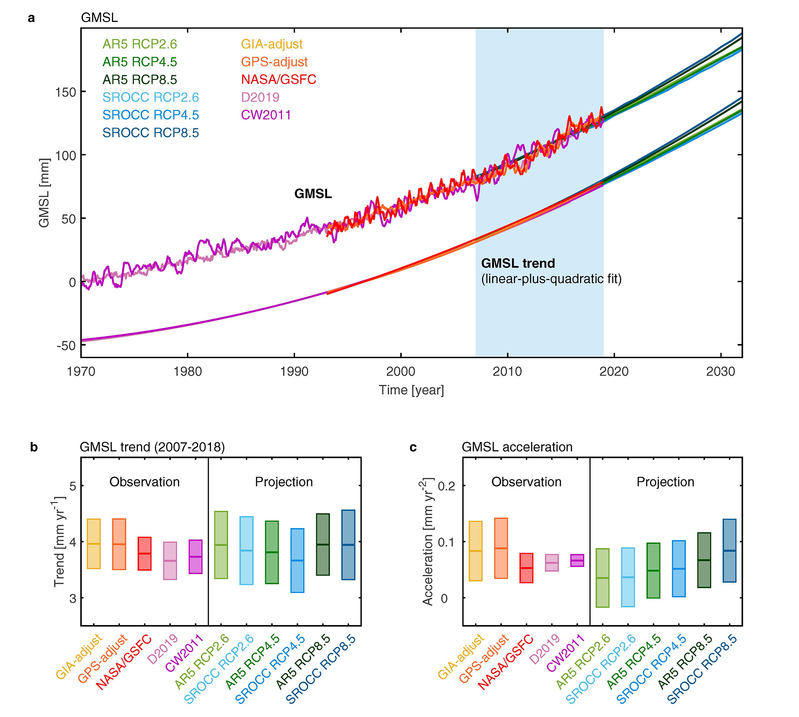